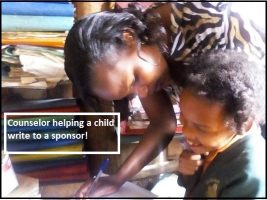 I have asked my family to be part of this sponsorship – to keep this young girl, Damari, in their prayers.  Her picture is prominently displayed on our refrigerator. We have been sponsoring her for a couple of months now, but we don’t know much about her other than the information included in the sponsorship packet from Mosaic Vision.  We have never sponsored a child in another country, so we don’t know what to expect. We pray for her well-being every day, though, and it is hard not to think about her when we see her sweet picture all the time.
Just now the mail arrived, and in it was an envelope from Mosaic Vision.  On the front of the envelope it says “A letter from your sponsored child.”  Wow! This is exciting, and I can’t wait to read it. I didn’t think she could read or write, and that is quickly confirmed by the letter stating that she told the Mosaic staff person what she wanted to say to us, and that person wrote it out.  What are really adorable are the pictures Damari has drawn in crayon in the margins. I know one is a tree – banana, I think, and I think another is an animal, but I’m not sure. She has probably never had crayons before.
Damari first greets us “in the name of the Lord” and then says “thank you for sponsoring me.”  She tells us she is enjoying going to school, that she has a little sister, and that she enjoys playing something called “net ball” at school.  She says it is the rainy season in Uganda and asks about our crops! I will have to tell her in our next letter that we only grow some tomatoes.  Maybe I will send her a picture of our tomato plants. Do they have tomatoes in Uganda? I don’t know.
Her letter is so dear to me.  I feel like we are beginning a relationship that can more than that of sponsor and orphan.  I know she will be more than an item on my credit card statement each month. I can hardly stop thinking about her and wishing I could hear her voice.  I guess whenever God says it is time to add someone to your life he expands your capacity to love. Isn’t that just like Him!

GET NEWS FROM US