Kyomugisha Evas is a young upcoming counsellor who just finished her diploma in Guidance and Counselling as well as a Certificate in Primary Teaching through the Mosaic Vision Ministries Programs Department.

Evas lost her father when she was still young. She was the only child of her mother but her father had 5 other children from 2 other women. After the death of her father, Evas’ mother went back to her biological home and left Evas behind. Before the father passed on, he was an alcoholic and even used to brew local beer as a means of earning a living. As a result, Evas started taking the local brew and became a victim of alcohol which resulted into her joining bad peer groups.  ‘

After the death of her father and as a result of her mother leaving her, Evas resorted to join bad peer groups characterized of taking alcohol. Her and her other siblings were taken by different well-wishers because they were still young to look after themselves. Evas was then introduced to Mosaic Vision Ministries. She was enrolled into the project and more so was resettled back to her home. Evas gave her life to Christ and quit the dirty involvements with her peers. Also, Evas with the help of Mosaic Vision was able to resettle his brothers and sister back to their father’s home where they are to date. They were also enrolled into Mosaic in which they are beneficiaries.

Through the Mosaic Vision Leadership Program under which mentorship  is key, Evas was counselled and mentored to become a leader of her other peers. The once vulnerable young girl turned into a strong confident and fortunate aid to her other peers in Mosaic Vision.

Today, Evas is happily married to a God fearing man and looks forward to having and raising God fearing children in the near future. She is giving back to Mosaic Vision through the Mosaic Alumni Association where she is serving as a Secretary and leads her other peers into giving back to the ministry. She looks forward to assisting his brothers and sisters in Mosaic to make good, informed and healthy decisions for their better future. 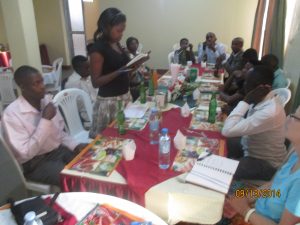 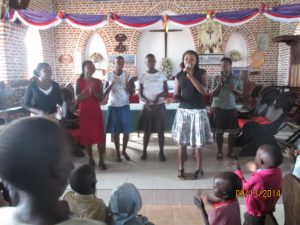 She leads her peers during the worship time at one of the Mosaic children’s gathering (centre day). 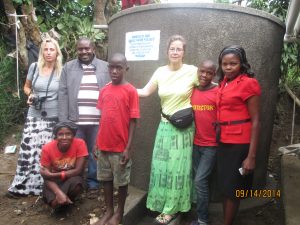 Evas poses with Dr. Shannon and one of the children’s sponsors Keri at one of Mosaic families after Mosaic donated a water tank to the same family.