Halerimana Alex is one of the mosaic vision alumni who completed his advanced certificate in electrical installation and Regulations a course he pursued for three years from kabira technical institute. 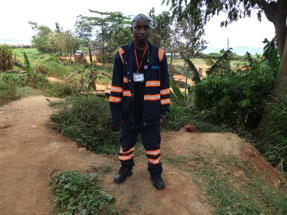 Halerimana Alex at his work place

His young brother Nsenga Hillary completed a certificate in food processing and technology from Kyambogo University and he has gone back to the same university to do a diploma in the same course with all their sponsorship through mosaic vision ministries.

Born in a family of three children, Alex and Hillary’s dreams were to study and become important people in the future but due to the state of the family that they were born in, things didn’t work out very well as they had wished. Both of their parents were peasants and could not raise all that much to support them. The older brother cleophas lost track after he failed to get school fees and went to Kampala to look for survival but this didn’t scare Hillary and Alex to lose track. They persisted with the conditions, seeking support from friends and relatives of their family as the father was pressing on hardly and struggling with HIV/AIDS. It was worse when the father died in 1992 and remained with their helpless mother. They stayed with their mother but after things got hard for the mother, Hillary went to stay with the grandmother in mitooma so that they can pay school fees for him and relatives started soliciting fees for Alex as he was studying from Kampala. Time came when the relatives gave up because they were also limited with funds. Unfortunately the supporting mother who was giving support to them also passed on in 2004 and Alex had no option to continue schooling but rather to come back home and sit back. The struggle remained with them as they were looking for survival and life worsened.

U-turn, it was in late 2005 when one of Mosaic local church partner and a Pastor got concerned with the children’s’ state from where after he reported to mosaic office-Uganda then  and this did not take long Rev Baturakwe and Mrs. Ahumuza Allen (Mosaic staff then) came ,visited the family and they were put on programme immediately. Life started becoming better as MVM could give them everything including school fees, scholastic materials, basic needs, caretaker and everything. Dreams started to be re kindled when Alex was approved to do his Advanced certificate in electrical installation and Regulation a course he did for three years from kabira technical institute and Hillary continued to High school (St. Gerald’s  S.S) and then after was approved to do a certificate in food processing and technology which he finished with the support from Mosaic vision ministries. This year, Hillary enrolled back to Kyambogo University under the Mosaic Vision Leadership Program to pursue a Diploma in the same course where as Alex got a job and is currently working with Uganda Breweries Limited as an electrician. They are both thankful to their sponsors for the great support they gave them and wish them Gods blessings.